The technology company TCI Cutting will expand its facilities in Guadassuar with the construction of a new warehouse dedicated to the manufacturing of industrial laser cutting machines. The new space will be built on adjoining land and more than 6 million euros will be invested. The works will be executed in two phases.

This expansion, which will be carried out in two phases, will allow TCI Cutting to increase its production capacity as well as to devote more space to technological innovation. Precisely, these new facilities will develop the most innovative projects in laser cutting technology.

The new models of fiber laser cutting machine that the company has recently launched to the market will also be manufactured. Among these models are the SmarttuberFiber; the Spaceline Fiber and the Dynamicline fiber.

The SmarttuberFiber is a fiber laser cutting machine for tubes, an element widely used in a wide range of sectors. This machine is capable of processing tubes from 20 millimeters to 220 millimeters, as well as cutting both open profiles, with our five-axis head, or closed. All this with a very low energy consumption and an unmatched cutting quality.

All the machines designed and manufactured by TCI Cutting are equipped with all the features to integrate into the industry 4.0, also enabling the transformation of our customer´s companies to intelligent manufacturing environments, fully digitized. 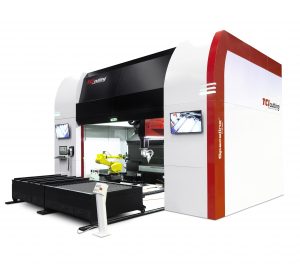 In this regard, the new Spaceline Fiber opens a world of possibilities for 3D production with five-axis laser cutting.  The complex cuts production becomes a simple task thanks to the fully robotic system of this laser cutting machine. The powerful arm that houses the 3D cutting head allows the creation of cutting programs with multiple angles for the same piece, at a speed of more than 200 millimeters a  minute. Its connectivity with digital systems generates a very intense and high production flow.

TCI Cutting has a large career designing and manufacturing water and laser cutting machines. Its technology and innovation place this company as one of the top players, competing internationally among the best manufacturing solutions companies. Its cutting machines are used to produce aircraft pieces, submarines or armored vehicles. Among its clients are companies such as Airbus, Arcelor Mittal, Bosch or General Dynamics.

Their history is closely linked to innovation. In 2010, their managing director, Emilio Mateu, was recognized with the Rey Jaime I Entrepreneurship Award.

A path through which TCI Cutting is considered one top growing companies. CEPYME 500, the Spanish confederation of small and medium-sized companies, has included TCI Cutting as one of the companies with the most significant growth in recent years.

Figures speak for themselves at TCI Cutting. In recent years, it has tripled its workforce and business volume and their expectations are to double those figures in less than five years. In recent months, TCI Cutting has expanded its already long list of countries to which it exports its precision industrial cutting machines, such as the United States, Australia, India or Kazajistán.