2018 is the best year in the history of the company, founded 17 years ago. Sales and billing have increased, mainly thanks, product innovation and careful customer service, which have positioned the company as a benchmark in the sector.

With a sustained growth of 20% in both national and international turnover, TCI Cutting has been selected by CEPYME (Spanish Confederation of Small and Medium Enterprises) as one of the 500 companies with the most significant growth in recent years, for their results and capacity to generate added value, employment, innovation and business projection.

Last year TCI Cutting has launched new machines on the market, which in this period of time have been the most demanded. Those machines are of the fiber laser: Smarttube, Dreamline, Dynamic and Smartline.

The Smarttube Fiber is capable of processing tubes from 20 milimeters to 220 as well as the square profiles, two essential elements in a wide range of sectors. The head of five axes of this machine opens infinity of possibilities since it allows to cut both open and closed profiles and process a wide variety of materials without losing quality or productivity

TCI Cutting’s Dynamicline Fiber is pure power, without losing sight of electrical and productive efficiency. With versions that reach up to 12 kW of cutting power and its design that includes linear motors, the possibility of cutting thicknesses of up to 30 mm and reaching an acceleration of 3G and an accuracy of 3 microns. Travel speeds of up to 340 m / min guarantee the highest productivity for the most demanding customers.

The Smartline Fiber machine offers an unbeatable high production level and excellent cutting quality for thin and medium thickness sheets. The maximum sheet thickness depends on the chosen output power. The high energy efficiency of the fiber laser ensures a significant reduction in energy consumption. This machine is available with output power ranging from 1000 watts to 8000 watts.

The Dreamline makes the production of complex cuts a simple task. The powerful bridge that houses the 3D cutting head, allows the creation of cutting programs with multiple angles for the same piece. The five axes or 3D cutting head of TCI Cutting is the only patented system in the world that allows an infinite turn and maintains the focal point. 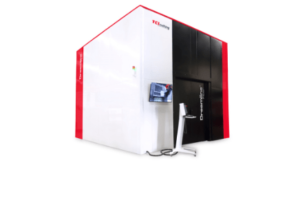 All cutting solutions from TCI Cutting are integrated into Industry 4.0, a concept that the company champions thanks to the tools it designs and produces to fully digitize companies and their production processes. With the two powerful manufacturing management systems PROmanager and Smarttouch, TCI enables its customers to digitally connect production processes and the entire work environment, allowing even machines to make decisions in both production processes as in logistics.

Innovation is one of the priorities of TCI Cutting, which every year increases its investments in cutting-edge developments to remain a European leader and advance in other markets further afield. International recognition has been evident in the most important fairs in the sector in which TCI Cutting has been present during 2018: BIEMH, MetalMadrid, Euroblech, Andvanced Factories or other forums in the sector in countries such as Austria, Romania or Ukraine.

The growth of the company is parallel to that of its facilities, in order to adapt itself to the new and broad economic scenario. With the launch of the new ship that is being built next to the current ones, TCI Cutting will change its production philosophy, reducing production times and improving the competitiveness of its products.

The expansion of the space will also allow the internal growth of the company that has gone from 30 initial workers to more than 200, with both national and international profiles.

The expectations for next year are very positive. With the launch of new products, TCI Cutting will focus its objectives for 2019 in improving the competitiveness of the company, adding value and differentiation to its products, always highlighted by their quality and with the most competitive prices in the market.